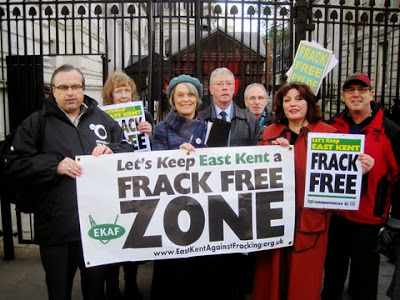 On Friday, 22nd November 2013 a delegation of five members of the committee of East Kent Against Fracking (EKAF) delivered a letter to the Prime Minister setting out the case against fracking in the UK.

They were joined by Gayzer Frackman, who had already made two 250-mile walks from Lancashire to London with the same aim. The letter he delivered to 10, Downing Street on the second occasion was co-signed by Andy Pemberton, the dairy farmer from Lancashire featuring in Greenpeace’s Wrong Move campaign whose land is threatened by fracking, by Louise from Frack Free Somerset, by Kathryn from Balcombe and by Ian Crane, the ex-oilfield executive of Fracktured Future fame, who presented the anti-fracking case so convincingly at the EKAF event in Dover on 16th October.

We are writing to you on behalf of East Kent Against Fracking, an organisation which represents hundreds of residents of East Kent, by no means inveterate protesters or trouble-makers but ordinary people who have taken the trouble to examine the issue of hydraulic fracturing (‘fracking’) and become extremely concerned about the dangers it presents for the UK. We are standing up alongside our fellow citizens to protect our environment, public health, local economy and social cohesion against the deteriorating effects which fracking and related drilling practices have brought to many parts of the USA over the past decade.

We would like to put the case against fracking in the UK to you and trust that you will give it as much attention as you have so far given to the pro-fracking lobby.

First of all, it is a myth that the kind of fracking proposed has a long history in this country. In fact, it has been carried out (with damage to 80 homes from earth tremors) only at Preese Hall in Lancashire, starting in 2011. The process involved is slick water fracking, used since 2003. We are fortunate in being able to learn from the decade-long experience in the USA and the operations in Australia that this kind of extraction of unconventional gas and oil should be opposed on principle, not just as a localised or NIMBY issue, for the following reasons:
1.      There is mounting evidence that fracking inevitably causes water, air and soil pollution, even if a borehole has been properly drilled and sealed. 7% on average of new boreholes leak immediately[1]: it is simply impossible for the most experienced geologists and the most highly skilled engineers to guarantee that drilling can be carried out with complete safety to the environment. Even when a borehole is successfully drilled and lined, it is likely to fail eventually[2] and toxic fluids left underground by the fracking process will seep up the annulus to overlying aquifers and soil, causing contamination which will be a threat to human and animal health, as well as making the area uninhabitable. This may be 20-30 years after the borehole has been drilled – a very long time after the company responsible for securing the environment has left the area. The clean-up operation will, of course, devolve onto the local government authorities and cost considerably more than the £100,000 originally granted to the community for permitting the drilling. Indeed, the loss in value of one single property in the East Kent area would amount to far more than this sum.

If you have any doubts about the threat to water supplies, three applications for exploratory boreholes to assess the viability of extracting unconventional gas from the former Kent coalfield have recently been withdrawn by the applicant (Coastal Oil and Gas Ltd) owing to the unassailable arguments made by the Environment Agency about the risks which operations of this kind would pose to the vital chalk aquifer. It lies not far above the coal and shale strata and supports a high density of public supply boreholes, forming part of the North Downs groundwater resource, which supplies at least 70% of the county's domestic and commercial requirements.

2.      As for the question of strict controls on the extraction of unconventional gas or oil from underground, your government has accepted that the regulations which apply to conventional gas and oil exploration and extraction (such as in the North Sea) are inadequate. That is why you have set up the Office of Unconventional Gas and Oil (OUGO). However, this body has so far failed to produce anything appropriate to the risks involved, the most serious of which I have already outlined: irreversible water contamination, air and soil pollution, leading to health problems.
The US government has reduced standards of monitoring and regulation by excluding the extraction of unconventional gas and oil from the jurisdiction of federal environmental protection legislation (“the Halliburton loophole”), thus leaving the states and local authorities to take up the responsibility for regulating, monitoring and dealing with accidents. The UK government is giving every indication that it intends to follow the same agenda:
§   by cutting Environment Agency budgets further and faster than expected;
§   by proposing the closure of air quality monitoring stations and the abolition of Air Quality Management Zones;
§   by indicating it will seek to end a landowner’s right to refuse permission to drill under his/her land;
§   by putting political pressure on local authorities to permit drilling applications;
§   by pledging deregulation, while at the same time assuring us that accidents which have happened abroad could never happen in our highly regulated industrial scenario; and
§   by appointing gas industry moguls to cabinet posts, including Lord John Browne, former CEO of BP, who while in office has made extensive use of his power to appoint non-executive members of his choice to government departments concerned with regulating the oil and gas industry[3].

Conflict of interest in the highest offices of state, rampant deregulation, exemption from environmental protection legislation, dismissal of risk, denial of alleged harm, disparagement of dissent and legal gagging of dissenters – these are all hallmarks of the political climate which have allowed fracking to spread unrestricted across rural America over the past decade.  This laissez-faire approach enabled fracking companies to go from a small handful of vertical test bores in Western Pennsylvania in 2007 to over 3,000 wells, about half of which are now horizontal fracking wells, spreading like a fungus across the once-rural landscape of Northwestern Pennsylvania[4].

From an economic point of view, it may conceivably be acceptable for certain areas to be made uninhabitable in vast continents such as North America or Australia, but we clearly do not have this option on our small, densely-populated island. Our geology is also much more sensitive and riddled with faults, making drilling hazardous at the best of times.

Serious effects on human health have also been documented in Australia among people living close to unconventional gas extraction operations. This has been confirmed by The Australian Medical Association's incoming president in Queensland[6]. The effects range from nose bleeds and skin rashes to debilitating headaches and an increased risk of cancer.

To add to these concerns, the exposure of residents to constant noise and lighting at sites is known to affect their health. The consequences of loud noise are well understood and serious, but now the problems of low frequency and subsonic sound exposure, especially in the long term, are becoming known and studied. It has been shown by the Centre for Human Performance (Portugal), School of Biomedical Engineering, Sciences and Health Systems at Drexel University (Philadelphia, PA) and CITIDEP (Portugal)[7] that such exposure can cause major health effects, including cardiac infarcts, stroke, cancer, epilepsy, rage reactions and suicide.

4.    It seems, however, that you and your government are in favour of slick water fracking in the UK because you believe that it will lead to cheaper energy. You are clearly of the opinion that this benefit outweighs the risks to our environment, health and quality of life. However, Lord Stern, a cross-bench peer and professor at the London School of Economics, has said that the claim of cheaper energy from UK unconventional gas supplies is "baseless". Since UK gas is traded internationally, any shale gas boom in the UK would be unlikely to have an impact on the gas price. In the USA, where fracking artificially lowered gas prices significantly at the outset, gas is rarely exported because other markets are too far away. Expert commentators from the International Energy Agency to Deutsche Bank have also said different geological, legal and regulatory conditions make it unlikely the US shale gas boom would be repeated in the UK[8]. The CBI, Chatham House and OFGEM have also expressed their doubts about shale gas bringing prices down.

In the USA, SMEs have been impoverished as their businesses have faltered, struggled and failed. They are, however, the largest provider of net new jobs in the USA, in spite of all the oil and gas industry’s rhetoric. Independent analyses of shale plays throughout the country confirm that wells are short-lived and reserves not as great as industry promises. In addition, communities where drilling has occurred are now dealing with the expensive aftermath. The drilling companies have offloaded that significant burden onto the taxpayers and local businesses. This is true of the oil and gas industry as a whole. In fact, economists estimate that if all the external costs of oil and gas were included, gasoline would cost in excess of $12 per gallon (it costs on average $3.30).

What are these costs? Firstly, water must be provided for communities where it has been contaminated. Secondly, there are rising health care costs to pay for those suffering from the effects of fracking, everything from skin rashes to respiratory problems and cancer. Last but not least, county councils are left with the costs of repairing roads damaged by the constant stream of heavy goods vehicles to and from fracking sites. Some roads require annual maintenance at $70,000-$80,000 per mile; others need basic reconstruction at a cost of up to $920,000 per mile.

In conclusion, at EKAF we are well aware that solutions must be found to supply UK energy needs in the years to come. Unconventional gas from fracking can never be a “stop-gap” measure. Even if the most optimistic projections for its supply are realised and environmental risks ignored, it will be a decade before we can have the tens of thousands of wells necessary to make production viable. By then we could have already taken vital steps to end our country’s reliance on gas and to make homes more energy efficient, eventually converting them to using exclusively renewable sources of energy. Government subsidies would be far better spent aiding and hastening this adaptation than giving tax breaks to foreign fracking companies, which provide no lasting solution to our energy needs. This policy is already enshrined in the National Planning Policy Framework and is a far better strategy for reducing our energy bills in a long-term, sustainable manner.

Many of the arguments for fracking are made by those who have vested interests in the multinational energy giants. We know that, as Prime Minister, you have the best interests of the country first and foremost at heart. We hope we have been able to alert you to some of the very real dangers we face if we go down the path to fracking, not least of which is that of turning our countryside into an industrialised toxic wasteland. This is not the legacy any of us want to leave to our children and grandchildren.