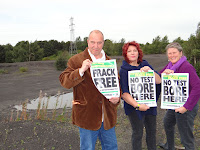 
Hundreds of people will be attending public meetings this week to discuss three controversial planning applications to allow exploratory drilling for coal and shale bed methane gas at the East Kent villages of Shepherdswell, Guston and Tilmanstone(1)

Dover District Council will be discussing a motion calling for a full report on the implications of the planning applications at its meeting on 18th September (3).

Protect Kent, an affiliate of the charity Campaign to Protect Rural England (CPRE) has issued a statement expressing its concerns about the planning applications and will be holding a public meeting for residents of Guston, Shephersdswell and Tilmanstone on 25th September (4).

The applications have been submitted to Kent County Council by Coastal Oil and Gas Ltd, which already has permission to conduct exploratory gas drilling at nearby Woodnesborough.

KCC Principal Planning Officer Mike Clifton has confirmed to campaign group East Kent Against Fracking (EKAF) that the deadline for raising objections to be addressed in the committee report will now be Friday 15th November, not 6th October as previously posted.

EKAF and the Kent Green Party strongly oppose the applications. Chair of EKAF, Rosemary Rechter said 'we understand from Graham D Warren, hydrogeologist of CPRE Protect Kent Environment that exploratory drilling could pollute the Chalk Aquifer which lies beneath the drilling sites and provides water for thousands of homes in Kent.’(5) EKAF Vice Chair, Julie Wassmer pointed out that 'additional vehicle movements and noise and light pollution resulting from 24 hour drilling operations will industrialise the East Kent countryside, causing property blight for residents and harm to local wildlife.’ Green councillor, Ian Driver warned 'If gas is discovered and permission is granted for extraction, this may lead to full-blown fracking which will cause serious damage to the entire area.'(6)