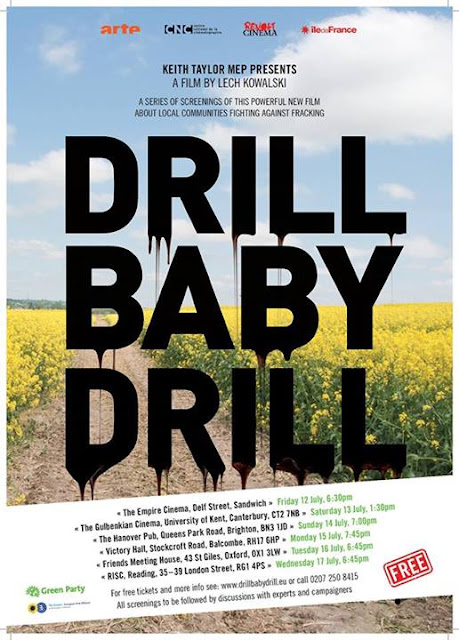 Keith Taylor Green MEP for the SouthEast has organised a tour of the anti-fracking film 'Drill Baby Drill'.

The tour starts with a free showing at the Empire Cinema, Delf Street in Sandwich on Friday 12th July from 6:30pm

The film will have a brief intro from Keith and is followed by a discussion on how fracking could impact East Kent with the proposed test bore at Woodnesborough just outside Sandwich. EKAF hope to have speakers at both showings.

If you cannot make that date it will also be at the Gulbenkian Cinema at the University of Canterbury on Saturday 13th July at 1:30pm

The film by Lech Kowalski tells the story of the impact on an ecologically pristine agricultural area called the lungs of Poland as Chevron, the world's fourth largest energy corporation plans to build a shale gas well in their village


Organised by Keith Taylor and The Green Party.

http://www.lechkowalski.com/en/video/item/5/drill-baby-drill
Posted by SteveW at 11:17